They had been going to their biggest industry show for years.  Really, since the company’s founding in the 1980s.  But this year was different.

Over the past few years, A Brite Company had been going through a transformation.  Growing past their toll-blending roots in the surface finishing industry, the company developed new lines of business and markets to help shore up the whole business.  Add in a transition in leadership and you have a reason to dance in public. 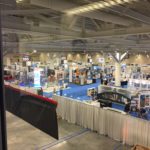 That public space with the SUR/FIN trade show and conference, the annual meeting of the National Association of Surface Finishers (NASF).  Held in Cleveland in 2018, this national event was an opportunity to showcase and emphasize a number of initiatives:

The planning for this June 2018 event started in August 2017.  The long-lead time was needed to formulate not only the configuration of the booth itself, but the staffing plans, travel plans, and, most importantly, the budget and payment schedule.

The process started with laying out a plan.  Dan Dunigan, the son of the founder and my client since at least 2011, knew what he wanted to communicate to this familiar audience.  He needed a larger platform and bigger space as the 10×20 inline booths of past years just weren’t going to cut it.  The company had grown up and needed to convey that along with the changes in the company’s direction and leadership.

First stop was enlisting the aid of trade show industry professionals, Randy and Beth Smalley of Smalley & Associates in Arlington.  They came up with a 20×20 rental exhibit. Along with a configuration that not only dominated the floor (the booth was one of a handful of 20x20s on the floor), it had the real estate and workable space to bring in demos and have engagement space.  The team could also use the aisles to talk with prospects, clients, and partners. 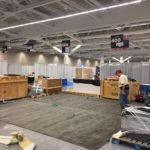 Smalley not only provided the booth and assembled the graphics, they also arranged the logistics and show services.  They also willingly worked with my designer, Chris Howay, who had been the architect of the site rebrand (you can read that story here).  It was a turn-key operation for Dan and his team.  The extra bonus for A Brite was the Smalley’s willingness to customize a payment schedule to match both companies’ cash flow requirements. It is rare to find this kind of partnership.

Engagement went beyond the show floor. Social media was active leading up to, at, and following the show. We tweeted live daily from the show to build a true at-show experience for their audiences.

I personally supervised the installation and dismantlement as well as stood staffing duty during show hours.  I also acted as press liaison. 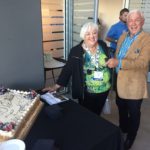 Several social events, including parties by others commemorating the 80th birthday, were attended by most of the A Brite contingent and also reported on via social media.

While there are a number of  aspects of the show plan we might have handled differently in hindsight, for a company at this point in their life cycle, this was a must-do exercise.  We gathered a record number of leads and made contacts and reconnected with a number of partners and customers they hadn’t seen in years. It was judged a success in terms of visibility and in terms of meeting the goals set.

If you have a similar project need, let me know.  A lot of work that can be a lot of fun.