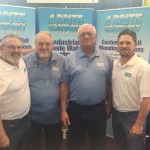 When you spend time with a company you get to know not only the products and services they offer, but the people inside the company as well as their partners and competitors.  And you can see (and sense) when change is occurring.

For the past seven years, I’ve had the good fortune to have a relationship with the owners and managers of A Brite Company, a Garland, Texas, based toll blending and equipment supplier to the surface finishing industry.  At least that is what they started out as when we found each other.

Our relationship, too, has morphed and changed with time.  I started out setting up and managing basic social media for them those many years ago.  It took until last summer for them to ask us to assemble and manage all of their marketing and outreach efforts. In the process, I expanded the team to include my website and design collaborator, Chris Howay of Valiant Media, as a critical part of our team.

That’s what this story is really about: that coalescing of disparate marketing elements into one cohesive plan, process and approach.

What we’ve accomplished in the year since we took over the management of this marketing program:

The crown jewel in this effort is the website.  When we took it on it did not in any way resemble the business that was  being conducted at A Brite.  After three months of discussion and rewriting and, finally, publication, we were able to launch the site that revolved around the three key pillars of the business:

Having begun life in the early 1980s as primarily a toll-blending chemical house, that was by no means reflective of their current business model, one that focused on the whole of a manufacturing facility.  The process we used to revise the site really reflected back on the business and allowed Dan (Dunigan, the now president of the company) to really think about how he was doing business.  In other words, it was as much about the business itself as the website that was supposed to reflect that business.

When it comes to advertising, this is a work in progress.  Stuck with ads of existing design, we focused instead on when (and for how much) ads should appear.  We ended up developing solid relationships with three (really two) key publications that represented two of the three pillars.  At the very least we were consistent in where we were being seen and how much things were going to cost (having a predictable budget).

I am also most proud of the regular communication we set up and managed with the team.  Each Friday morning we met over an agenda and included all team members, including Shanda Harris of Dally Marketing, so that digital advertising and Ad Words campaigns were included in the process. Regular, consistent communication in meetings that resulted in action items made sure that the company was communicating both with the marketing team and itself.

This client has grown to a point that now they have to focus on working on the company rather than in the company.  Whatever direction they choose to take, the die has been cast: our blended team rescued this brand with analysis, collaboration, consistent communication and just plain good, hard work — on the part of all involved.