Recently a new puppy came to join our family pack.  Sally, our youngest Cairn Terrier, came to our home at age 4 months.  An energetic puppy with a brain ready to be filled with ideas and new experiences.

Sally has a tremendous advantage in our house: Harry.

Harry is my 11-year-old Brindle Cairn.  The old man of the house.  He’s been a solo dog for some time, but has been, in previous lives, part of a pack of as many as three dogs.  It’s been an interesting time for Harry and me to have Sally come into our space.

While the younger dog brings energy and a new perspective–she barks at puddles, for example–she also has had to adapt to her new surroundings.  Where she had come from living with her litter mates and her parents, she now was on her own with two older guys.  It was amazing to watch Harry “teach” her things about how to behave in the household.

She figured out the doggie door in her first few days.  Had potty training down within a week.  And understood mealtime protocols, well, in a short time. 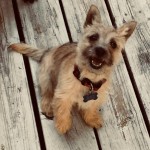 But what was even more amazing was how she learned her manners from Harry.  My senior dog was gracious and careful with her.  When she played fighting games, she figured out when she had to stop.  The daily ball game wasn’t something she could take over.  And the prime sleeping spots in the house, well, we know who controls those…

Socializing Sally is also on the agenda.  I’ve had both dogs out at the same time to restaurants, meetups with friends and out to stores where dogs are welcome.  think of it as taking your junior staff members to a networking event you frequent quite often.  As it is at home, Harry leads the way and Sally follows along.

One of the issues with generations coming up is social interaction.  While the so-called “iGeneration” has a hard time making eye contact and shaking hands, a little prodding by an older associate and being out into public networking, social and business events will help them adapt and learn the skills that will do them well for a long time to come.

And it all started when Harry met Sally.