After laying the ground work, now came the difficult part: matching the candidate students and the willing workplaces.

Given that this was a pilot program, the team needed to set up a way to make it more clear the matching process of students to workplace.  Several things led to the choice the team made.  First one of the major employers, the City of Garland, championed by their Director of HR, Kathryn Klepak, suggested that she wanted to come visit the students or give the students the chance to interact, job-fair-like, before The Day (we had earlier set Job Shadowing Day for Friday, October 9, so that the students didn’t miss any class time–it was a teacher in-service day).

Also, we looked at a process of how medical students are matched to their residency schools.  The Match (National Residency Matching Program)  has students visit schools for interviews and rate the schools; the schools, in turn, rate the students.  These mutual rankings are then turned over to NRMP and on Match Day (sometime in March each year), fourth year med students learn where they will be studying and working for the next 4 years. 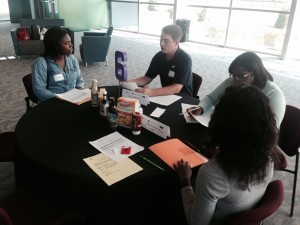 Five employers (represented by 8 teams of interviewers) were set up in an area where the chamber held its monthly networking event.  Like that event, Direct Connect, it took on a “speed dating” event feel with teams of company representatives interviewing pairs of students for 5 minutes.  Students came to the table with resumes and having done their homework on each company.  The instructors also prepared their charges with coaching sessions and encouragement.

The five employers (three departments of the City of  Garland, Milano Hats, KraftHeinz Foods, Plastipak Packaging and Garrett Metal Detectors) peppered the students with questions ranging from asking about the details of their resume to “describe yourself in three words.”

“Each student walked away with eight interviews with real employers today,” Tracy Glick said. ” And the employers got a real solid idea of the quality of students that GISD produces.”  Ms. Glick is in charge of the International Business Magnet at Naaman Forest High School and one of the instructors responsible for the formulation of the program.

From the employer side, the perspective was equally positive.  Kevin Tolly, HR Manager at Plastipak, was the one with the innovative “three words” question.

“We usually get more time with candidates, so this was a test for us, too,” Mr. Tolly said. “Overall, it was a great experience for us.”

At the end of the day, the ratings from both sides were collected and put into a spreadsheet.  In almost all cases, students were placed at one of their first choices and companies were assigned their top choices.

The next step was to announce the assignments and set up the actual Job Shadowing Day on Friday, October 9.

Two steps down, one to go.

1 thought on “Building the Next Generation of Networkers–Part II: Matching Student and Workplace”