When my website development partner, Chris (Howay) called it was seemingly out of the blue. He had finished a website for a new client being managed by a friend and they asked him a question that made him think of me.

They wanted to go to a trade show and weren’t quite sure where to start.

This process started with a phone call and a lunch meeting in early February for a show (the TAA Show in Houston in April).  Immediately I sprang into action with a plan with a scope, schedule and proposed budget range.  While it took a few weeks to get buy off on a final plan, once things were in place we could proceed.

The client had already purchased a 10×10 space in the hall.  All I really had to do was ask for the service manual so we could get the ball rolling on services when the time came.

And since it was only a 10×10, that meant a backwall with a graphic plus some window displays in the open space of the booth.

During the planning process, I made the effort to assemble the team and get initial cost estimates and milestones.  This made finalizing the plan and presenting it all that much more complete.

Since Chris had done the website design and worked through some of the branding issues, it only made sense he would do the backwall graphic and any additional graphics needed in the booth. 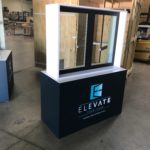 Because we took the approach that there would be window displays in the booth, we fastened on the idea of making a multipurpose window display.  With only two options of window designs, it simplified the pedestals format.  It also gave us the option for maybe later doing a dealer display that could be replicated.

For this work, I enlisted the aid of Elizabeth Smalley of Smalley Exhibits. Beth and her husband, Randy, are industry veterans of many years and my oldest friends in Texas. Exhibit building, crating and show services are their lifeblood.  So we were able to come up with a workable plan and execute it quickly.  As with Chris, I made Smalley my subcontractor to make billing and payables simple.

And, because their shop is in the Midcities area of DFW and only a few blocks from Elevate, it made previewing and logistics all that much more simple.  Plus Beth could put the client at ease with her calming personality and confidence.

This project really went pretty flawlessly.  From concept to production to shipping to show site to return and billing, it all worked.

As for that open door: Elevate is in need of more work related to lobbies and dealer displays as well as other public relations.

As that final movie line says: “I think this is the beginning of a beautiful friendship.”