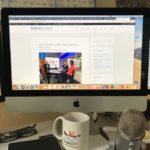 Musicians and performing artists get it often. For the writer or content creator. out end product is less visible and often passed by or even ignored.

Not that it isn’t read or good.  But appreciation, that’s another story.

Yet the other day I heard it.  That crowd.  The applause.

After a client meeting I rode the elevator down with a young man whom I engaged in conversation. I quickly learned he works for my client.  We talked for a few minutes, leanring more about what each of us did.  Without prompting or asking, he volunteered:

“The blog has gotten so much better.”

First of all, someone is reading the blog.  Secondly, he has read it long enough to have been able to compare earlier versions to the current version.  Yes, several years of work has paid off!

More importantly, a professional in the industry read the blog and made a judgement that it was good and useful.  A testimonial, such as it was.

While his may have been only one voice, to me it was a roaring crowd.  It is so nice to know that someone is reading your work–even if it isn’t attributed to you.  Besides, that tells me the work that went into this endeavor paid off–it was read.

This is the kind of response and feedback that keeps me working and moving forward.  I must be on to something.