The objective is to know more and to be disciplined about it. Just about the time you get a process in place, you find a way to improve it. 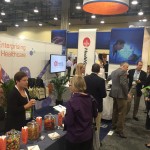 But, hey, why not?  If the frame holds its shape, why not put a new cover on it?

At least that’s what I learned from the manager of the second show I worked with HMS, the NHCAA.  The steps were intact, but we did a variation of the first two steps in the three-step process. To refresh your memory, this was the program we implemented for HMS at ASHHRA earlier this fall.  The results from that worked well, so the managers got together and made some suggestions.  Here’s what they came up with to fine-tune the process for their specific business.

Because the commercial business unit sells to healthplans which vary in size and scope and are arrayed geographically, the initial fact-finding calls were divided up among the four groups of sales people chasing specific prospects and established customers.  Because this is a more relationship-driven part of HMS’ business, we focused the seven sales people on the 40 most important customers in the sea of nearly 100 prospects and customers.  What we found was interesting.

“This exercise brought discipline to our process,” Brent Sanders said during the roll up to the show.  His group is all experienced sales people in tune with their clientele, but this added a perspective that they hadn’t utilized before, he admitted. Mr. Sanders is an executive with HMS.

Look for my report from show site in about a week.