We all really should know the fine art of conversation.  And how to interact with people.

Not perform a monologue in front of or monopolize a conversation. Really, how to talk with someone and, more importantly, listen.

Strangely enough I was reminded of this in a conversation with someone I’ve known almost all of my life.  Just when you think you know someone and think they know certain things, along comes a situation like this.

My long-time friend and I had a phone call that was long overdue.  It started out well, but then I noticed several things:

After about 30 minutes of the biology, political and science lecture, I interrupted by saying: “while I appreciate the lesson, why I really called you was to talk about family and friends.”

Stopped him dead in his tracks.

He really didn’t know what to say. Or how to react. In short, he wasn’t socialized.  Even my dogs are socialized.  I make sure they get to spend time with other dogs. 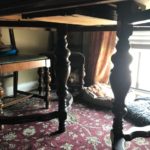 I chalk this up to what I’ve been calling “the shut-in syndrome.”  That is, people who aren’t out in public much, get most of their news and information from a single source and really don’t engage with much of a variety of people.  It’s really a symptom of the larger issues we have in our political and popular culture in the 2010s. No one listens to anyone with a differing opinion than theirs.

In my friend’s case, he and his wife are retirees who don’t leave their home much and their circle of friends is small–and limited to people with similar or the same viewpoint as theirs.   If you see yourself, regardless of age or marital status, falling into this trap, try these remedies:

We all need to work harder at being good conversationalists and kinder to one another.  Working at being socialized–that is, interacting with a variety of people and acting appropriately, will serve both you and those around you so much better.  And think how much you might learn in the process.